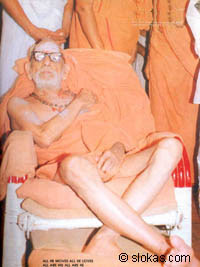 Another thing must be mentioned.

There are several parts like vivekaM (Discrimination), vairAgyaM (Dispassion) and shamaM (Self-control). In none of these can one expect to have attained perfection until the final stage of Realisation.

Each of them will at every stage be somewhere below the mark of perfection. All of them go together towards perfection until the final Realisation happens almost suddenly!

Why do we have to do all this SAdhanA? The objective is to purify the mind completely to such an extent there is no mind left thereafter. What does it mean to say that there is no mind? Desire, the hankering after matter, should be absent.

I just now told you that this eradication of desire and hankering after material things will happen at the stage of Realisation. In fact that statement itself has to be modified.

Only if the Realisation of the Self happens, the taste for matter will vanish. In other words, Self –Realisation is first. Then only, -- ‘then’ does not mean ‘after a time’ – immediately, though only after the Realisation, does the material hankering vanish completely.

The Gita is very clear on this (II – 59). “For each sense, if the corresponding sense-object is denied to it, by that practice those sense-objects will go away (in other words, the concrete physical experience of them would have stopped); but the taste of that experience of it – as they say, ‘the cat that has had the taste’ (ruchi-kaNDa-poonai, in Tamil) – that taste of experience would linger on internally and it will vanish only when the Realisation of the Atman takes place” :

*paraM dRRishhTvA* -- Having seen the Absolute; Just by the experience of the Absolute Principle. *rasaH api nivartate* -- the taste of experience also vanishes.