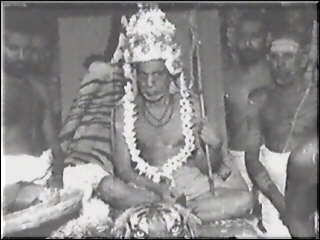 In short, both mind-control and sense-control have to go hand in hand, complementary to each other.

In fact all the parts of SAdhanA have to move in one wavefront and so are to be practised as such in mixed fashion. I already told you they are not supposed to follow one after the other in isolation. I have to emphasize this further in the case of ‘shama’ and ‘dama’.

Sometimes the senses do act involuntarily; maybe we can say those are the times when the mind has nothing to do with them. But generally almost all the time, the stopping of the actions of the indriyas or of the mind, does need the sanction and prompting of the mind from within.

Therefore it is that we also have to contend with shama and dama together.

Lord Krishna at one place talks of ‘dama’ as the work of mind: “indriyANi manasA niyamya” says He in III – 7. The same structure of expression occurs in VI – 24 where he says “manasaivendriya-grAmaM viniyamya” – that is, the gang of senses has to be controlled properly by the mind itself.

‘By the mind itself’ – ‘not by oneself’ is what is underscored by the words “manasaiva” ( = manasA eva). Thus controlling, gradually and slowly (*shanaiH shanaiH uparamet*) one should calm down, says he.

In fact ‘uparati’ is the next in *shhaTka-sampatti* starting from shama and dama. ‘uparamet’ means ‘one should reach ‘uparati’, namely the calming down of everything.