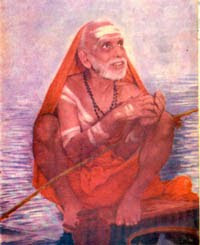 (Continued...)When the external holds (*bAhyAvalambanaM*) are all dismissed, that is ‘uparati’; and the discarding of all of them is ‘sannyAsa’. ‘nyAsa’ is throwing off or discarding; doing it well is ‘sannyAsa’.

In ‘Viveka-chUdAmaNi’, right in the beginning itself the Acharya talks of ‘SAdhanA-chatushTayaM’. Again, far inside, he talks about viveka, vairAgya and uparati

You may wonder why he talks about these well after a person has taken sannyAsa and has gone almost to the peak of SAdhana.

A little thinking will clear this. All the SAdhanAngas mature gradually into perfection as you go spiritually higher and higher.

That is viveka-vairAgya, elaborated in the beginning, is again taken up in shloka 175 (or 177) and he says that only by their ‘atireka’, that is, extra growth, the mind becomes pure and becomes eligible for mukti.

‘For the yati who has controlled his mind, I know of nothing other than vairAgya that gives him happiness’.

Similarly, after vairAgya comes knowledge and after knowledge, uparati – thus the complete fulfillment by uparati is mentioned in shloka 419/420.

But then the mind has now come to a certain uparati; will the ascent end there in almost a dry manner? No. It may appear so. But God’s Grace will not leave it so. This seeker who, with the single goal of seeking to know the truth of the absolute Brahman, has controlled all his desires and rested his mind with such great effort, would not be left alone by God just like that.

Nor would He give him Brahman-Realisation immediately.

His karma balance has to be exhausted, before that happens. Before that time comes, He would give him the opportunity to reach the samAdhAna stage that makes him ready to receive the upadesha of the mahAvAkya. And then the sannyAsa and then the mahAvAkya. It goes on thus.

But between ‘uparati’ and ‘samAdhAna’ there are two more: namely, ‘SAdhanA’ and ‘shraddhA’.