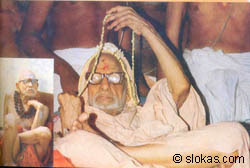 The policy of ‘Whatever will be, will be’ is what leads to the feeling of tolerance of ‘bad’ and that is ‘titikshhaa’ . When one is ready to reject what is called ‘good’ by calling it equally ‘unwelcome’, the attitude of ‘titikshhaa’ means that even that ‘unwelcomeness’ is tolerated. This is the ‘titikshhaa’ of even the good things.

Even though we might want to think indifferently about both good and bad things, our karma of the past might bring in certain good things in spite of ourselves. Without our wanting it wealth might pour in. Relatives and friends may behave very favourably. More such good things might happen.

One has to show ‘titikshhaa’ even of good things; in other words, even the good happenings must not be unwelcome – they also must be suffered, endured! The Acharya has defined ‘titikshhaa’ as *sahanaM sarva-dukhAnAM* in Viveka Chudamani as well as in his AparokshAnubhUti.

It means to ‘bear all sorrows’. Here ‘all’ includes the so-called ‘pleasures’ also because what appears to be pleasing or a pleasure turns out to be really a sorrowful thing from the point of view of eternity.

Only ‘JnAna’ is happiness. Happiness is only that which arises from advaita-jnAna.