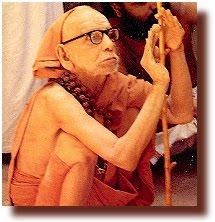 That is how, in the story of Brihadaranyaka Upanishad, the single letter ‘da’ was conveyed by BrahmA to all the three species (devas, asuras and manushyas) at the same time but each one of them understood it to mean differently. They understood it to stand for the first letter of a message specially intended for them.

The divines took it to stand for ‘dAmyata’, that is, ‘control your senses’. The Creator agreed with their interpretation of the message.

The humans took it to mean ‘datta’ that is, ‘Give: Do acts of charity; be charitable’. This also was approved by the Creator.

The asuras took it to mean ‘dayadhvaM’, that is, ‘Be compassionate’. Again the Creator gave his approval of this interpretation.

The Acharya in his Bhashya has commented on this that the three categories of people – devas, manushyas and asuras – are all of them in the human kingdom itself.

People who are generally known to be good, but still do not have their senses in control are the ‘divines’.

People who have not even an iota of compassion in their hearts are classified as asuras. In other words, all the three messages of advice are for humanity.