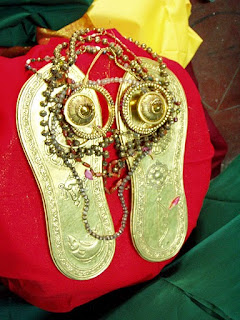 In the Mahanarayana Upanishad, with great sympathy, it prescribes ‘dama’ regimen for a Brahmachari and a ‘shama’ regimen for the renunciate muni who has renounced everything.

The intended meaning is that both ‘dama’ and ‘shama’ are to be started right from the Brahmachari stage so that when one gets to the stage of sannyAsa, one can attain the total fulfillment of ‘shama’.

Where the mind finally calms down and settles, that is the Atman. When the mind stops, the Atman shines.

Even in the previous stage, the senses would have stopped running involuntarily and the mind would have of its own volition controlled the senses.

Thereafter the residual vAsanAs of the mind would be the ones still to be eradicated. This eradication happens when ‘shama’ is totally achieved.

Such a complete cessation of the mind will generate the realisation of the Atman. Thus it is that ‘shama’ is the final calming down.

That is why we say “shAntiH shAntiH shAntiH” and also refer to it as “Atma-shAntiH”. The word ‘dAnti’ (controlled mind and senses) is also of the same kind. The controlling action implies a force, whereas what follows is ‘shAntiH’.

All the great people pray mostly for the controlled calm of the mind. Lord Krishna also advises us:

The use of two words ‘chanchalaM’ (wavering) and ‘asthiraM’ (unsteady) to describe the turbulent nature of the mind is significant. By whatever prompting this wavering and unsteady mind runs outward towards objects, from each such prompting shall the mind be pulled back and drawn into the confines of the Atman, says the Lord.