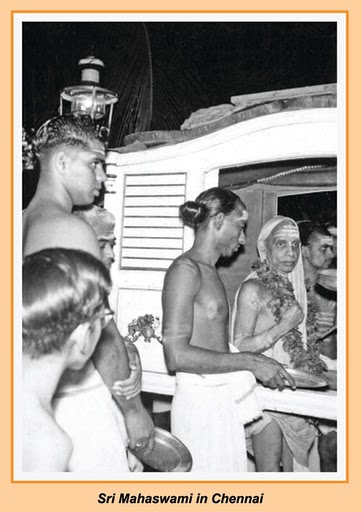 (Continued...)
Like ArAdhanA, upAsanA also generally refers to worship of something with attributes. Not just ‘generally’.

In Vedas and Vedanta ShAstras it is so referred. Instead of Karma-Bhakti – JnAna, the Vedic scholars call it Karma- UpAsanA – JnAna.

In Brahma Sutra (IV – 1 – 1) it says, one has to repeatedly recall (mananaM) the teaching that was learnt – in other words, one has to think about it, analyse it and confirm it .

Here in the original sutra there is no mention of upAsanA done with bhakti, or the jnAna-SAdhanA based on the intellect. It is just a general mention of necessity for mental repetition.

But it is clear from the organization of the Sutras that go before and after that the repetition recommended in the context is for a mumukShu who has formally obtained the MahAvakya teaching.

The Acharya has clearly emphasized this point in his commentary.

But when he finishes the commentary on this particular sutra, he himself takes up the matter of the upAsanA path and demonstrates how the Upanishads talk about both the process of upAsanA and the process of knowing as the same without any distinction between them.
(Continued...)
Posted at 9:45 AM