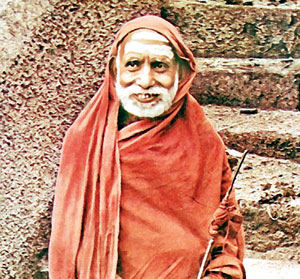 So it is not a question of being logical; it is a question of seeing the psycho-logical (!) perspective. The ancients called it ‘adhikAri-bheda’, that is, difference in prerequisite qualifications.

Secondly, it is not just that he understood the psychology of different types of seekers of spirituality and preached accordingly. It is more. Both the advices he gave, though seemingly opposite, are ‘true’, each at a particular stage of evolution. In the phenomenal world, creation and the universe and the activator of all of them, namely, Ishwara, are all ‘real’ certainly. But when we enquire into the root cause of all this, we find that the more basic Reality is the Existent Self-in-itself that is actionless but through a miraculous magic wand of MAyA  brings about all this moving world.