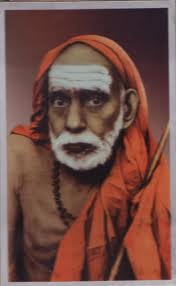 
Thus we are constrained to view Shiva as ‘para-brahman’ and ambaaL as ‘para-brahma-shakti’. Though neither of them exists without the other, we may allow ourselves the privilege of  speaking of them AS IF
they are different. Without para-brahma-Shakti, the world would not be there.  Now we have to consider two more cosmic functions in addition to the three well-known to all of us. We were nothing but the calm Shiva-svarUpa once; from that state somehow the real nature has been forgotten and we have arrived at  this ignorant state of a jIva and we find ourselves in a revolving cycle of  samsAra without the knowledge of our true state. The power which has done this to us must also be the same para-brahma-Shakti.