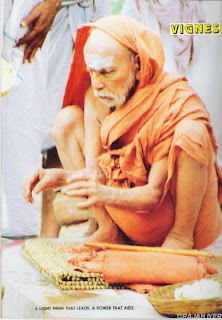 
According to that  shAstra, Shiva and  Shakti together form the paraBrahman. All the universe is a reflection of that paraBrahman. By saying this it does not mean that the reflection is outside of Brahman. Nor does it think of a ‘kevala-shivam’ ( ShivaM and ShivaM alone) that has no connection with the universe.