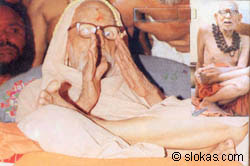 Any experience in the world of duality is opposite to that jnAna and therefore is only to be considered as unhappiness, not happiness.

Consequently one will have to develop an attitude of treating those happy experiences only as unhappy ones. At a later stage , just as one bears misery with forbearance, so also one should be able to forbear with what appears to be happiness. That is why the Acharya says *dukhAnAM sahanaM* (forbearing the sorrows) and stops with that.

All our scriptures recommend to us the forbearance of both pleasure and pain equally; in other words, even what appears to be a happy pleasing thing should be ‘endured’ as indifferently as we are expected to endure the unhappy things.

Of course that happens after we reach a certain stage of maturity. But even at an earlier stage, at a ‘lower’ stage, we have to observe ‘titikshhaa’ of good things in another way. When a good thing happens our mind gets excited about it.

The excitement is as bad as the one we get when an unhappy thing occurs. In both cases the equanimity of the mind is the victim.

Only when the mind is steady without any vibration can one have the enlightening realisation of the Atman. Thus even the excitement that naturally follows a happy feeling should have to be ‘endured’. It is another kind of forbearance.