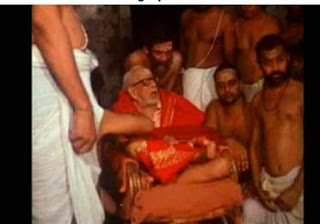 I draw your attention to the way mumukShus are described in this shloka. It is clear therefore that till the moment that one gets to the point of the experience of Brahman, to the point of one becoming a jIvan-mukta, one is still a mumukShu.

The whole of Viveka Chudamani has been given by the Acharya a story-setting.

The disciple asks the Guru (shlokas 49/51) “What is bondage of samsAra? How did it arise? How did it get rooted? And how do we release ourselves from it?”.

The teaching contained in Vivekachudamani is the reply to all these questions.

The disciple listens with great bhakti towards the Guru and coupled with his true ‘mumukShutA’, as soon as the Guru finishes his teaching, he obtains all the wisdom and enlightenment – the supreme-most brahma-jnAna and brahmAnubhava – and thus being released from the very bondage about which he questioned earlier, he bows to his guru and departs as one who is *nirmuktaH* (shloka 576/577), the Released One.