What is the object of Love of an Atma-sAdhaka? - Part 2 of 5 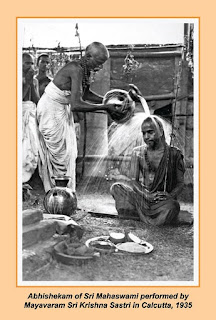 Of course it is true that a JnAni after he has attained Brahman realisation sometimes does perform worldly service by the prompting of the Almighty of the mAyic world.

Our Acharya himself was one such.

But that was, after the stage of influence by MAyA – in other words, one has established himself as ‘MAyA-proof’!

That JnAni is not doing things on his own volition; he does them as an instrument of Ishvara.

Thus love can be expressed or exhibited either before one begins any such thing as advaita-SAdhanA or, after one has attained Realisation, in the form of service to the world or to individuals – but not at the present stage of advaita-SAdhanA that we are discussing.

One in a million who has engaged in this SAdhanA not doing worldly service is also not a big loss to the world. In fact it is the other way.