The four components of the armour of spirituality 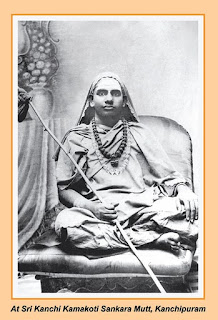 The entire SAdhanA regimen is a four-pronged army to fight the bad elements and capture the kingdom of the Atman. The last of the four prongs was ‘mumukShutvaM’.

‘mumukShutvam’ has been all along described as something to be achieved. What was there as a trace in the beginning, slowly got intense and that intense desire for mokSha is to be finally, at this stage, culminated to its peak intensity, by the intellect. Now and then it might have happened that one has slipped into the depressing thought: “Release of Bondage? Realisation? Not for poor me!”

One should not give way to such a thought. Not only that. One should develop the positive attitude: “It is possible to achieve; to know the Truth. Why would it be inaccessible, if persistent efforts are made? Guru’s Grace will manage all my ups and downs. So let me yearn for the Release, for the Truth, with all earnestness”. This should be done as an exercise.

“Was I not a total ignoramus once? Even for me the ascending steps of discrimination, dispassion, sense control, shraddhA became gradually accessible. Guru’s Grace that has brought me so far would not let me down. It should certainly be possible for me – if only I intensely yearn for it”. This is the exercise of mumukShutA.

Here ends the SAdhanA-chatushTayaM. But remember, this is only the middle stage – second stage. Higher than this is the third stage.
Posted at 9:45 AM