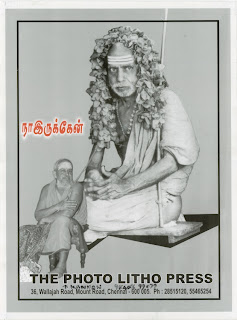 Durvasa, Adi Shankara and Muka are three such. Such Grace exhibits itself first in the eloquence of these hymns.

And the result is, the devotee who revels in the recitation and repetition of these hymns, himself gets that eloquence and flow of language and of speech.

The Goddess gave such an eloquence to Muka. ‘

MUka’ means dumb’. We do not know what name he had before. But from the moment he composed the five hundred shlokas in Her praise, we have known him as the poet Muka !

Both the AryA-dvishati and the MUka-pancashati bring to our vision the majestic splendour of the form of Mother Goddess like an expert painter's masterly painting.

The third one, the Soundaryalahari is the crowning glory of all three and of all hymns of praise of the Mother Supreme.
(Continued...)
Posted at 9:45 AM