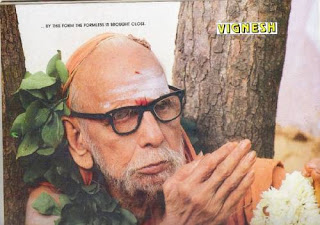 While he begins with ‘shivaH-shaktyA’, the most potent name of ambaal, namely Shakti, gets mentioned. Shakti means power.

It is the absolute Brahman's power or energy that ambaal personifies.

So this name tells everything about the Goddess. And it comes in the very beginning, but never after.

(In shloka #32, the word Shakti appears but there it is a code-word for a syllable in ambaal's mantra).

Finally, one more point regarding occurrence of names.

The role of a woman has three stages: as daughter, as wife, as mother. The last two roles certainly do get mentioned very often in stotras pertaining to a feminine deity.

And again, when the first part of 41 shlokas ends, he ends by referring to janaka-jananI, the mother-father role of both Ishvara and IshvarI of the whole universe.
(Continued...)
Posted at 9:45 AM