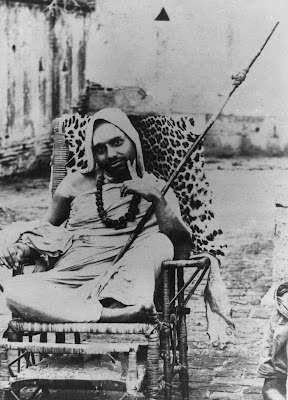 It is wrong to think that the goal of Bhakti lies in the dualistic attitude of being separate from God. It is by this wrong assumption that people ask the question: How can a jnAni exhibit Bhakti? In the very path of Bhakti wherein it appears there is an embedded duality, the same Bhakti would lead the practitioner to the stage where he will ask: Oh God! May I be one with You! This is the subtle point which the questioning people miss.

When that stage comes to the devotee, the very parA-shakti known as kArya-brahman or saguNa-brahman will bless him with that jnAna that takes him to the non-dual kAraNa-brahman or nirguNa-brahman. Not everybody can practise the path of jnAna that brings the realisation of the mahA-vAkyas by sravaNa (hearing), manana (thinking and recalling) and nididhyAsana (contemplating). Only when the mind vanishes one can realise the Self as the Absolute Brahman.

If that is so, the real question is: How to kill the truant mind, which refuses to be subdued, much less vanquished ? The very effort of vanquishing the mind has to be done by the mind only. How can it kill itself ? The palm can slap another; but it cannot slap itself. Though we are thus brought to a dilemma, there is a supreme power which has created all these minds.