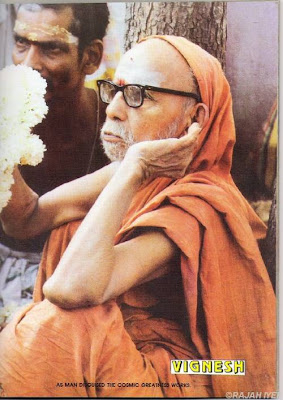 In accordance with this, even when he composed many stotras on Shiva and VishNu, he never goes deep into the shivAgama or vaishNava-Agama nuances but dwells mainly on the bhakti and consequent emotions only. On the other hand when he worked on Soundaryalahari, the first part, Ananda-lahari, –even though it is said that he only ‘brought’ it (from Kailas) and not composed it – is totally a shAkta scripture.
The sum and substance of the twin work of Ananda-lahari and Soundaryalahari seems to be: “advaita is The path; if not, the next (alternative) is ShrI-vidyA” ! In fact, ShrI-vidyA is the connecting cord between advaita and all that is dvaita.
It unifies the ShAntaM-ShivaM-advaitam with Shakti, the creator of duality, and therefore, of the universe. In LalitA-sahasranAma
also, the last name is lalitAmbikA and the last but one is shiva-shaktyaikya- rUpiNI. And this takes us to the very beginning shloka of Soundaryalahari !