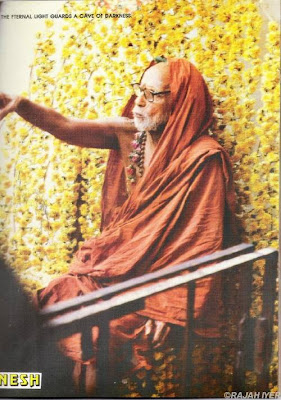 The philosophy of advaita takes creation as a ‘vivarta’ (a false appearance, manifestation, of reality) whereas the ShrI-vidyA school takes it as ‘AbhAsa’ (an effulgence of a ‘reflection’). That the sun appears as a reflection in water is ‘AbhAsa’.

In the same way the universal Cit-Shakti reflects itself with a limitation and becomes the jIva as well as the universe -- this is the shAkta concept of creation. But without the original object called the Sun there could be no reflection.

So in basics it comes back to the advaita concept. But the shAkta holds that to the extent there is an object with its reflection, there is a phenomenal reality for jIva and the universe. It does not hold that it is ‘mithyA’ which is the advaitin’s contention.

It is the latter part of Soundaryalahari that dwells on the beauty (saundaryam) of ambaal's form. The former part dwells on Her Shakti. It is called Ananda-lahari.