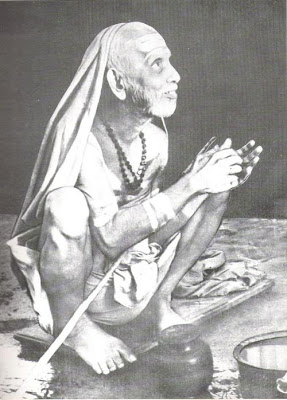 In ShAktaM, it is claimed that the play of duality starts by the Will of ShivaM coupled with Shakti.

Even here there is a role of MAyA-Shakti. But we shall dwell on it later.

It is Brahman that appears as jIva, through the effect of MAyA. If one follows the path of jnAna and transcends MAyA, then jIva realises itself as Brahman, says advaita.

In ShAktaM also it says that the jIva and ShivaM are basically the same and actually become the same in the state of mokshha; particularly in the ShrI-vidyA scriptures it is specifically accepted so.

Dvaitam, VishishhTAdvaitam, SiddhAnta-shaivam (Shaivasiddhantam), ShrIkaNTa-shaivam (ShivAdvaitam), Kashmiri Saivism  - in this order, the philosophies start from a concept totally distinct from advaita, gradually nearing and ultimately becoming very near to advaita.
(Continued..)
Posted at 9:45 AM