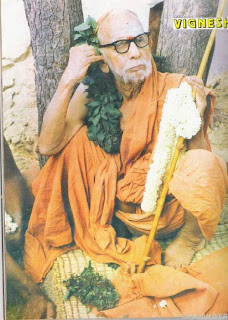 Sage Ramakrishna has said: I have seen many forms of Gods and Goddesses; but I have never seen one more charming than ‘tripurasundarI!

The word ‘soundaryam’ pertains to SundarI and means ‘The Beauty’.

But the beauty of it all is, that the name ‘tripura-sundarI’ or any of the other (synonymous) names of the same form, namely, ‘LalitA’, ‘RAjarAjeshvarI, ‘KAmAkshI’ or ‘KaAmeshvarI’ do not occur anywhere in the text, including its title !

Even the other descriptive names of the Goddess like ‘hima-giri-sutA’ (daughter of Himalaya mountain), or simply, giri-sutA, shivA, bhavAnI, umA, satI, pArvatI, chanDI – occur only at one or two places.

General attributed names, like ‘jananI’, ‘mAtA’, ‘ambA’, ‘devI’ meaning either ‘mother’ or ‘goddess’, -- which commonly go with all feminine deities -- occur at a few more places, but even they are few.