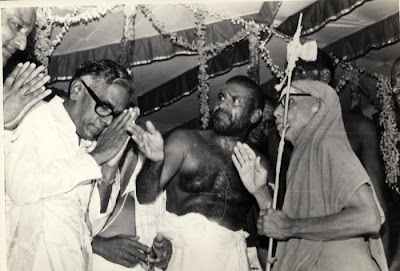 On the other hand what do we observe in our experience? Whether it is the teaching about jnAna in the Gita, or the Viveka Chudamani of our Acharya, or the Avadhuta Gita of Sri Dattatreya or the teaching in the Yoga-vASiShTa, or a song of Tayumanavar – even as we just read these we feel we are being taken beyond the curtain created by mAyA to some distant peaceful state of Calm.
Just by reading, in one’s spiritually ripe stage, such teachings, there have been people who have renounced the world and reached the state of Bliss-in-one-Self! If these teachings had not been written from that spiritual apex of Experiential Excellence, how could such things have ever happened?
Therefore, however much by our intellectual logic, we may argue whether a jnAni can get bhakti, how the jnAni can do any preaching and so such possibilities cannot exist and so on, these are certainly happening, by the Will of the Lord which is beyond the Possible and the Impossible.
It is only the Play of the Lord that, the jnAni, who is non-dualistic internally, appears to do things in the dualistic world. His mind may have vanished, mAyA might have been transcended by him; but that does not mean the outside world of jIvAtmAs has disintegrated.
What do we gather from this? There is a Super-Mind which does all this and in some mysterious way is compering and directing the entire universe. And it also means it is the same Supra-Mind that is making the minds of men revolve in the illusion of mAyA.
(Continued...)
Posted at 9:45 AM