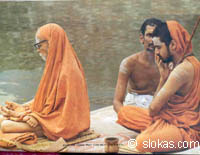 However, -- There are two grade-levels in shraddhaa, as there is in bhakti. The samAdhi I talked about just now is the higher grade; there is another one of a lower grade. The lower grade samAdhi is the ‘samAdhAna’ of the ‘shamAdi-shhaTkaM’ spoken by the Acharya.

‘samAdhi’ has generally the connotation of being in unison with the goal of brahman; so in order to make a distinction he calls this as ‘samAdhAna’. I told you already how the Acharya adds ‘shraddhaa’ to the five accomplishments mentioned by Rishi Yajnavalkya in Brihadaranyaka Upanishad. And Yajnavalkya calls the person who possesses them as ‘shAnta, dAnta, uparata’, etc.

The two words ‘Ahita’ and ‘AdhAna’ have the same meaning; namely, ‘to unify, confirm, establish, in one place’. What is supposed to be established, confirmed? Where?