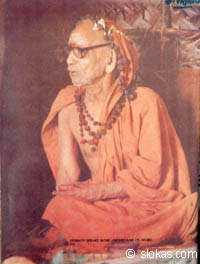 Ahamkaara is the mood (bhAva) that arises first in all thoughts. The thought of separate jIva as differentiated from the ParamAtmA, with an ‘I’ of its own, is what is known as ahamkAra (Ego).

When and only when that is destroyed then only the separate JIva-hood will go and the status of the Atman in its Realisation of one-ness with the ParamAtmA arises. This destruction/end of the Ego is the apex of SAdhanA.

When he defines ‘samAdhAna’ the Acharya talks of the intellect (buddhi) – the role/pose of ‘cittaM’ when it exercises the power of discrimination –and says that this intellect has to be fixed in Brahman. Ordinarily, cittam is equated with manas (mind). In the same manner, what is to be monitored and controlled with effort is the manas (mind) – this is the common understanding.

Even if we do not understand the meaning, we are in the habit of saying ‘The mind does not have samAdhAna (peace or rest)’ or ‘Rest your mind, pacify the restlessness of the mind’. In ritual mantras they say ‘manas samAdhIyatAM’ in the sense of ‘Let the mind rest in peace’.

And in reply to that prayer, one says *samAhita- manasaH smaH*. Note that in all this, it is the mind (manas) that is talked about.