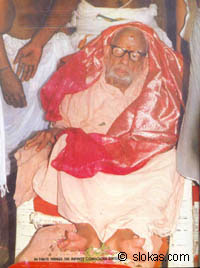 In the beginning he was likely to have had some modesty and naivety and a consequent shraddhA because at that zero stage one is rather scared about the strict requirements of discrimination, dispassion and sense-control and one wonders whether all these are achievable.

At that time it was easy to believe that perhaps in the spiritual field there might be many things which cannot be understood or argued out by the rational mind and one must trust the words of the scriptures and the wise.

But now after one has made some progress on the spiritual SAdhanA path, one is likely to think that the mind is now clear and hereafter it will understand all that has yet to be achieved on the path of Self Realisation.

This is a kind of ego – an unrecognizable ego that creeps in. Things do happen even upto the stage of Self-Realisation, that cannot be understood by the smartest intellect .

Even a JnAni who has achieved that Self-Realisation will not be able to explain them by his intellect. One has to continue with the same regimen without questioning them until the Self-Realisation sprouts up like the rise of the Sun.

When those things happen, one has to take them as they are, without analysing them by the intellect. One may have to be content with the thought:

“The SAdhanA that has brought me so far will certainly take me further by the same Grace of the Lord that brought me up to now; I shall not subject it to any intellectual questioning.”

Even after one has obtained Enlightenment, the things may still be inaccessible to the intellect. Even our Acharya – there cannot be a better Acharya than he – does not try to tell that secret of achievement to us in the language of the intellect. “I cannot describe it. Simply keep on proceeding with Faith” – this is his message and accordingly he keeps this shraddhA at this advanced stage of SAdhanA.