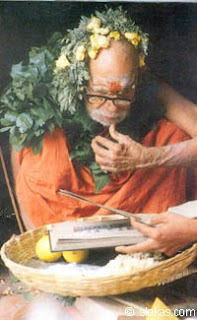 *avadhArana* has two meanings. One is ‘a deep conviction’. The other is ‘a limitation’. Both the meanings have to be integrated here. The intellect limits itself by concluding that this is ‘beyond my own jusrisdiction’ and therefore is determined to consider Shastras and Guru-words as true.

By shraddhA one can reach the Truth is what is implied by *yayA vastu upalabhyate*. ‘She’ (*sA*) is called shraddhA – the word is feminine – by which the Absolute Reality (*vastu*) is obtained (*upalabhyate*).

In the Tamil region we use “vAstavaM” and “nijam” for something true. The word “nijam” does not mean that “nijam” means ‘what is in its own nature’, or ‘what belongs’. Probably our usage that gives the meaning ‘true’ to it must have arisen thus.

When we dress up for a particular role in a drama we play the role, don’t we? That is only a role, a pose, a disguise. When we are off the disguise, we become what we are usually. So a disguise or a role presents only a falsity, whereas when we take off the role we become our true personality, whatever we are.

Since a disguise means falsity or untruth, its opposite, namely, the role to which we naturally belong, -- that is our ‘nijam’ – is taken to denote truth. This is how ‘nijam’ must have come to stand for ‘truth’! But let that be.

But the meaning of ‘vAstavaM’ as something that is true, is a correct one. The word has been derived from ‘vastu’. The nature of ‘vastu’ is ‘vAstavaM’. ‘vastu’ means a ‘thing’ ordinarily; but its most important connotation is ‘that which truly exists’.

Things and objects are not in our imagination; they actually exist and that is why a thing is called ‘vastu’. Thus ‘vastu’ means something that truly exists and so we also use ‘vAstavaM’ the property of ‘vastu’ for ‘truth’.