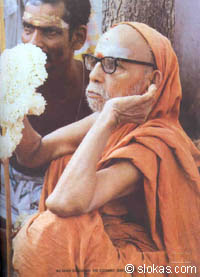 Even on the spiritual side, rather than simply bragging about belonging to the glorious advaita tradition without knowing anything worthwhile about the Atman, except one’s body and the goings-on of the mind, those experiencers of other traditions who are convinced that their soul has been born only to worship and propitiate the Divine are certainly greater.

One who thinks that his pure mind which is full to the brim with that kind of bhakti is the Atman is superior to some one who has had no experience of anything connected with the Realisation of the Atman.

Once the mind becomes that pure, automatically in course of time there is the chance of that very mind eradicating itself leading to Self-Realisation.

But let that be in the future. Right now, those followers of other traditions have, as I said, because of their shraddhA, obtained a divine contact and a divine grace and benefics. That is the very reason there are great souls in all our traditions, known the world over.

It is the play of Mother Goddess – Bikshaa of Illumination – that, at a certain stage, one rises on the strength of his shraddhA alone, without any effort on the part of the intellect. That is when shraddhA becomes most significant.

Even those who have taken several steps on the SAdhanA path should simply continue in the path of shraddhA and ask no questions; questions will not get any answers palatable to the intellect, nor will it be able to elicit any answers from the Guru understandable by the intellect.

It is for this reason that shraddhA has been placed as one of the parts of the SAdhanA regimen.

This kind of shraddhA, that is the opposite of “I shall find it myself; I will be able to intellectually understand it”, has to be there not only in the beginning but till the end. “The shAstras say so; our guru says so. Let me go on doing what they say – whatever may happen in between. It will automatically take me to the Goal” – this attitude is shraddhA. It is not just one of the components of SAdhanA ; it is the peak component.