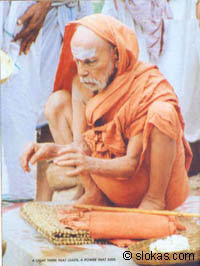 The Acharya says in his introduction to the second chapter BrihadAranyaka Bhashya *shraddhA ca brahma-vijnAne paramaM SAdhanAM*. The Lord also emphatically says (B.G.IV-39) *shraddhAvan labhate jnAnaM* ((only) he who has shraddhA gets the enlightening wisdom).

A special status is attached always to the mantras of the Upanishads called *mahA-vAkyas* that declare the identity of jIva and brahman. Even among those mahAvAkyas, one of them gets a further unique status, because it is the one which is directly imparted to a shishhhya (disciple).

It is the one in Samaveda, where it is given to a celibate youngster who is not a renunciate. The Absolute ParamAtmA who is denoted by ‘That’ is what You, the jIvAtmA, are – This is the message there.

The father Uddalaka Aruni is the one who doles out the teaching; and the receiver of the teaching is the son, Svetaketu. The father keeps on reeling mantra after mantra and ends up with the emphatic refrain: “That is what You are”.

As he goes along, right in the middle, he says, “Go and bring a banyan fruit, my child”.

“Here it is”, says the son and produces the fruit.

“Break it” says the father.

[Note by R. Ganapathi, the author of the Tamil rendering: ‘Here the Swamigal gives the conversation in a dramatic fashion feigning two voices, one of the guru and one of the disciple.]

“What do you see within the broken fruit?”

“What do you see inside, now?”

“The nothing that you are referring to has an invisible subtle thing in it. “It is from that subtlety the entire banyan tree springs out” says the sage Aruni, and it is at that point, he addresses the child with affectionate warmth : “Saumya (Smart one), Believe me. Have faith in what I say. *shraddhasva*”