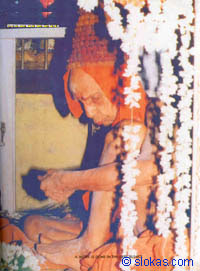 Action indicates a masculine power (*paurushhaM*) and so is indicated by ‘saH’ (he) whereas the inaction-like inertness of dispassion is denoted by a neuter ‘tat’ (that).

The words ‘shama’ (mind control) and ‘dama’ (sense control) both occur in the masculine as ‘shamaH’ and ‘damaH’.

Both imply control. Accordingly they adopt the gender that implies action, namely the masculine gender.

After saying what ‘shama’ is, he says ‘manasaH shama uchyate’ – this is what is known as ‘shama’ of the mind -- and here the masculine ‘shamaH’ is used. He does not say ‘shamaM uchyate’ in the neuter gender. But he does not use the explicit ‘saH’ (he) here as in the case of ‘viveka’ (discrimination) where he said ‘ayaM saH’ – this is he.

Also when he defines ‘shama’ instead of saying just ‘mind control’ he says ‘sva-lakshhye niyata-avasthaa’ meaning ‘what stays in its own goal’. After the active masculine work of controlling the mind, one stays in the peaceful state of resting in the Atman; it is this state that is meant by ‘shama’.

So, maybe, the Acharya did not want to emphasize the masculine aspect of shama, by using *saH* (he) for ‘shamaH’.

On the other hand, when he talks about ‘dama’ (control of the senses) he says *sa damaH parikIrtitaH* meaning “he is called damaH”, where the masculine gender is explicitly emphasized. When the senses run amuck, to control them and draw them behind a lot of masculine activity is needed, certainly.

The word ‘uparati’ is feminine. When we equate activity with masculinity then the actionless restful state has to be feminine. And so he says *uparatir-uttaamA* -- the highest is ‘uparati’ (cessation) – using the feminine for ‘the highest’. And, for the subsequent ‘titikshhaa’, he specifically uses the ‘sA’ (she).

Forbearance is known to be a special characteristic of women in general – the quality of a mother. Don’t we usually refer to the Goddess Earth as the ideal for tolerance?
Posted at 9:45 AM