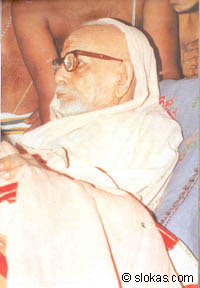 To prevent the rise of such ‘spRhaa’ is also ‘titikshhaa’. Recall the Lord’s words:

In other words, ‘titikshhaa’ stands for not being perturbed by a miserable happening as well as not being affected by *spRhA* at the onset of a happy occurrence.

One is not to be influenced by the dualities like pleasure and pain. To be away from duality means non-duality.

When duality disappears, the bondage of samsAra is cut and the gates of mokshha are already open. In Gita V – 3, Bhagawan has shown the ultimate goal itself as the end result of ‘titikshhaa’:

meaning, He for whom duality is gone easily releases himself from bondage.

Such a one is characterised by our Acharya as one who tolerates or endures dual opposites -- *titikshhuH dvandva sahishhNuH* -- in Brihad-AraNyaka bhAshya (IV – 4 - 23).