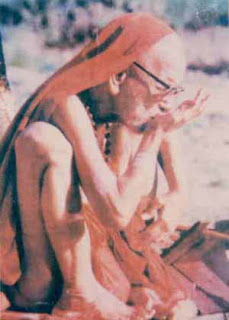 Without being swayed by emotion, it is the intellect as the component of the internal organ that weighs truth and falsity and makes judgments in all worldly matters.

That same buddhi has now to be withdrawn from that function and coordinated to converge on matters relating to Brahman. He says that is samAdhAnaM.

It is not only the feelings of the mind that run helter-skelter; the intellect also does the same. But we usually think it is the play of emotional feelings that is bad; we do not think in that manner of the goings-on of the intellect.

In the name of ‘Pursuit of Knowledge’, the intellect goes in search of all sorts of information and all of us are in the habit of praising such action.

It is generally an acceptable thing to say: “We should know everything; all arts and science. Even thieving is an art. (Recall the Tamil saying: *kaLavuM katrumaRa*). Even the Acharya got the award of ‘sarvajna’ (all-knowing)”. In fact I myself have told you many times the same things.

But note that such things are not told to a spiritual sAdhaka who is advancing in the second stage. They were all said to one who is far behind; that was the stage when the intellect has to be sharpened.