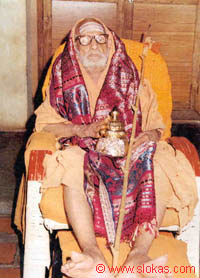 I have been telling you of ‘the mind’ so far.

But the Acharya has referred to ‘buddhi’, the intellect. *samyak AsthApanaM buddheH* are his words – namely, ‘the intellect must be caught hold of and fixed in Brahman’. The intellect (*buddhi*) is only one particular aspect of the mind.

Cit is Knowledge. The organ that the JIva has that is associated with knowledge is ‘cittaM’. This is an internal organ; called ‘antah-karaNaM’.

There are four: cittaM, manas, buddhi, ahamkAraM. The four together constitute ‘antah-karaNaM’. ‘Thought’ is something that is common to all the four. But its source is ‘cittaM’. The ‘cittam’ that produces thought associates itself with the other three.