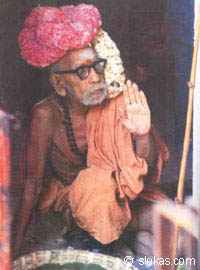 The SAdhanA is for the Realisation of Brahman which is attributeless (nirguNa) and which is the Atman . Therefore it is necessary to keep the mind unshaken in the Brahman which transcends the MAyA, instead of in the Ishvara with His MAyA.

By Ishvara is meant all the different forms of God. Originally it was one such form that was worshipped by us and that is why the mind was trained to focus itself on one thing. That was the first stage.

In this second stage, the mind has to have its ‘AdhAna’ in the Brahman without form. Off and on one will recall the saguna form of Ishvara. When it comes, don’t think of Him as the administrator of this mAyic universe but think of Him as Grace Personified (*anugraha-svaruupaM*) which granted us the thought that we have to transcend this MAyA.

And with the determination that ‘It is He (that saguNa form) who shows us the path of JnAna towards the nirguNa Brahman and so we should no more cling to the saguNaForm of His’, one should turn one’s mind towards the Atman principle.

He is the One who shines as our Atman.