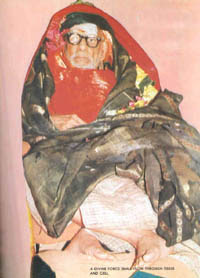 Had the Acharya told us all the secrets, there would not have been a necessity for Ramanujacharya to establish a VishishhTAdvaita.

Somewhere in the philosophy of advaita Ramanuja asked an intellectual question and not finding a reply to that, he thought he had a suitable reply to it and that became his vishishhTAdvaita.

OK, but did that reveal all the hidden secrets? No. That is why a Madhwacharya had to establish his dvaita. But even then intellectual questions remain unanswered.

That is why still there are many advaitins and many vishishhTAdvaitins. And we are arguing and arguing. Though these arguments are going on at the intellectual level, those who came thereafter, without worrying about testing everything on the touchstone of the intellect, simply follow their own Acharyas with shraddhA on the plea “I am born in this particular Smarta or Vaishnava tradition; let me follow with faith what my Acharyas in my tradition have taught us” – and they have reached great spiritual heights accordingly.

A smarta (belonging to the advaita tradition) may say that nothing would equal the experience of identity of JIva and Brahman, whatever these followers of other traditions may claim about their spiritual achievements. Let him say so.

But they are certainly greater than many of these smartas who don’t practise any SAdhanA with shraddhA. Maybe they have not reached the peak experience of realisation of nirguna brahman, of which the smartas speak. But isn’t it the same brahman that appears as the Ishvara or saguna brahman?

Those achievers of the other-tradition-followers do somehow establish a rapport with that Ishvara. And they do obtain a certain godly nature, blessing of Divine Grace and a heart of compassion.