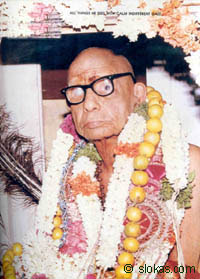 This is the mahAvAkya that is at the lofty peak of Vedanta that is taught as the great first step to SanyAsis at the time of their taking sannyAsa. And when this upadesha is being given first to that supremely qualified celibate youngster, the Rishi finds it necessary to say *shraddhasva*.

This just means that one has to have shraddhA as his only armour even at the last moment when the stark reality of Realisation of Brahman takes place.

Not only in the trust that we place on the concepts and the like. The trust has to be also that, ‘by that Guru who gives them to us one would also see the final gate open for us’. This is very important.

Even though he might be a JnAni, he has to play his role of a human, just as God plays the part of an Avatara. Even that would be only a way of showing the right path to some one. But when he involves himself in some of these human activities, the disciple may land himself into a doubt about whether his guru is indeed a JnAni.

Once he starts doubting why the guru is acting like an ordinary human, and whether such a personality can ever deliver the spiritual release that he is seeking, there begins the disciple’s downfall. That very doubt assumes gigantic proportions and like a ghost occupying his brain, does not allow him to continue his SAdhanA.

The constant thought that one has been cheated devours him as well as the dreams about his goal. “samshayAtmA vinashyati” (B.G. IV – 40) says the Lord -- ‘He who doubts, goes to ruin’. And when He says this he adds the words *ashraddha-dAnascha*, meaning ‘one who has no shraddhA’. In IX – 3, He says *ashraddha-danAH purushhaaH nivartante mRtyu-samsAra-vartmani* -- ‘the man without faith (is ruined and) comes back to this transmigratory cycle again and again’.