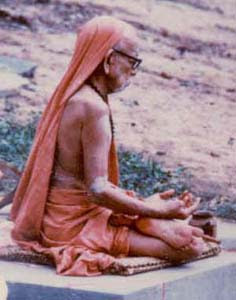 In this kind of environment it will be odd if I tell you to do such things with buddhi; I did not want to appear different, right from the start. So I tried to be smart and without saying it is the mind or the intellect that should be brought under control, I mentioned ‘cittaM’ which is common to both.

Also the Acharya himself has shown me the way for that. In AparokshhAnubhUti (Verse #8) he says
“The unitary focussing of cittaM on the goal of Absolute Reality (*sat*) is said to be ‘samAdhAna’*:
*cittaikAgRyaM to sallakshhye samAdhAnam-iti smRtaM*.

Having made all this introduction, we shall now see why the Acharya has mentioned the intellect here (instead of simply, the mind). When he was talking about shraddhA earlier, though he made it clear that buddhi (intellect) has to be kept aside and it is only the mind that has to posit the faith, still he said that it is the confirmation by the intellect (*buddhy-avadhAraNaM*) that is called shraddhA.

And we explained by saying that it is the intellect itself that has to decide that it has to play no role and thus make way for the mind to accept the words of the Guru and the Shastras. The present context where he says that buddhi (intellect) has to be focussed on brahman, and that is samAdhAnaM, is being done in the same strain .