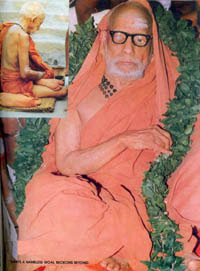 Ordinarily we take faith or shraddhA to be that which discards the function of intellect (and takes things on faith).

Here it says the ShAstras and words of the guru are taken to be true by an analysis of the intellect -- *buddhyavadhAraNA*. There is no contradiction.

Because, analysis or confirmation by the intellect does not mean one takes shAstras and words of the guru as true only if the intellect confirms them after an analysis. Then what does it mean?

It is the intellect that has to decide after an analysis: “I cannot expect to know everything. It is not possible to offer a judgement all by ourselves.

Regarding matters connected with after-life and with the Self, things incomprehensible to us, but intuited by the jnAna-dRRishhTi (intuited wisdom) given by the Lord Himself and by one’s own experience by the authors of the ShAstras and the Guru who knows the ShAstras; what they say have to be accepted by us without further inquiry”.

Mark! This is not what a stupid who has no power of the intellect accepts anything without question. Such a one will get cheated. When we said ‘nitya-anitya-vastu-vivekaM’, we did mean the process of discriminating between the good and the bad and that would certainly imply the use of the intellect.

In order to discriminate, one has to develop and train one’s intellect to become sharp. On the other hand when the Shastras and the Guru are saying something which is not comprehensible by that intellect, he has to accept that without allowing the intellect to intervene.

It is more difficult not to allow the intellect to intervene, rather than allow it to do its function. This is possible only if there is modesty to the extreme. One has to develop that kind of modesty.

Instead of having a stupid man’s faith, one has to cultivate an intelligent faith in the words of the Guru and of the Shastras, without countering them by objections – this is the shraddhA that is being talked about.