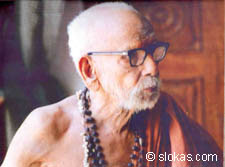 The vanishing of duality means there is only One. And the One is Atman, no doubt.

In summary the Acharya’s clarion call is : “One should not worry about either what is directly an unhappy thing or about what appears to be pleasant but in reality is also a miserable thing.

‘Not worrying’ means ‘not wailing’ about it. Nor should one look for anitdotes for either the sukha (happiness) or the dukha (unhappiness). Silently one should be forbearing both”.

sarva-dukhAnAM sahanaM : forbearing all unhappiness Note that so-called happiness is also included in the ‘unhappiness’.

apratIkAra-pUrvakaM : without searching for steps for nullifying (the ‘sukha’ or ‘dukha’) Note ‘pratIkAra’ means ‘antidote’ or an ‘annihilating step’.

Now let me take up the feminine gender used here. *sA titikshhaa* says the Acharya. ‘titikshhaa’ is a feminine word. But it is not just grammar that is involved here.

When he talks about ‘nitya-anitya-vastu-viveka’ (Discrimination between the eternal and the ephemeral) he says *so’yaM nityAnitya- vastu-vivekaH*; here he uses *saH ayaM* -- ‘that is he’ – thereby invoking a masculine construction. The word ‘vivekaH’ is masculine.

Maybe because of the age-old traditional opinion that a feminine mind is prone to vacillation and a masculine mind has a discriminating tendency. On the other hand the concept of dispassion is indicated by the neuter gender specification *tad-vairAgyaM* -- That is dispassion.

Maybe because, by means of dispassion one’s mind becomes immune and inert! In the process of discrimination there is an inherent analysis involved. Consequent to that, the mind becomes desireless.

So in discrimination there is an action (though mental) whereas in dispassion there is not so much action.