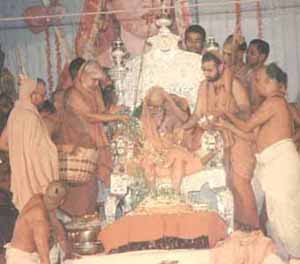 After having become an ‘Atma-sAdhaka’ (seeker of spirituality) he does not need any more outside knowledge. The only knowledge that he needs is Self- Knowledge. His intellect should not any more digress into other matters.

The only subject to which it should now be anchored is the pure Brahman.

The Gita (V -28) says *yatendriya-mano-buddhiH* that is, not only the senses and the manas, but the intellect also should be controlled.

Intellect has to be stationed in brahman, without tossing itself into several objects. This fixing of intellect in brahman has been called *brahmaNi buddheH sthApanaM* by the Acharya.

But the Upanishads on the other hand say that we cannot reach brahman by our intellectual power. In two Upanishads, namely, Kathopanishad (II – 23) and Mundakopanishad (III-2.3) it says emphatically * na medhayA* (not by intelligence).

Neither by mind, nor by speech, nor by intellect can the Atman be obtained – is well-known. Then why did the Acharya say so?

It means he is not talking about the final Realisation stage of ‘samAdhi’; he is only talking of the lower stage, *samAdhAnaM* and thus let us remember he has distinguished both.