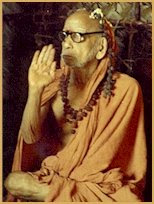 What is incomprehensibly divine would be made comprehensible by the divine itself if we cultivate intense love for that divine. This intense love is bhakti. If we have that, the divinity then would descend to make itself comprehensible to us. It is this bhakti-rasa coupled with the poetic rasa that our Acharya gives us in the form of Soundaryalahari.

So with all this introduction based on Sloka 1, we may now go forward.   Sloka 2 elaborates the words ‘hari-hara-virincAdhibihir-api ArAdhyAM’ (you who are worshipped even by Vishnu, Shiva and BrahmA and others) of Sloka 1. Here it says that only by Her Grace these three great divinities discharge their functions of Creation, Sustenance and Dissolution.

And this they do just by the power of the dust of the holy feet of the Mother Goddess! This praise of the divine dust is carried over into Sloka 3 also. It (the divine dust) is the ‘rising sun for the darkness of the Ignorant, the flower-bunch giving out the honey of wisdom for the Dull-witted, and the wish-fulfilling godly gem for the Poor’.