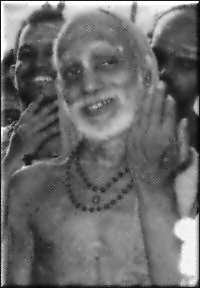 The Vishnu deity (of almost all temples) Himself, though He has four hands - with conch, disc, mace and lotus --, has no ‘vara-abhaya’  hands. Varada-rAja - the name meaning ‘the king of boon-giving deities’ -
-  in Kanchipuram, inspite of His name, does not have the ‘vara’ hand; He has the mace in that hand !

Durga, most of the times, has an ‘abhaya’ by the right hand, while the corresponding left hand is on the thigh - this situation being  called ‘Uru-hastam’ . Some of the SuBrahmanya deity-forms have the same
configuration.  Balaji of Tirupati has the vara-mudrA in the right hand, while His left hand is an ‘Uru-hastam’. Thus the statement of this shloka ‘Other than You, all other deities show the ‘vara-abhaya’ mudrA by their hands’ is to be considered a poetic exaggeration only.