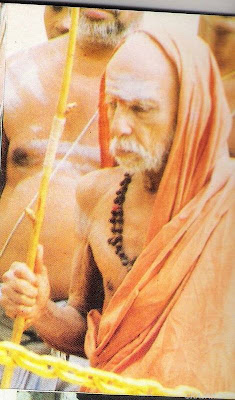 Thus arose two major setbacks in the culture. The first one is that those who were traditionally equipped to do the upAsanAs and were also  fit to do them, preferred the glamour of modern days to break off from their traditions.

And the second one is that all and sundry took to these difficult upAsanAs without proper guru or training. It is not clear, I must confess, which is the major disaster.

I know that I may be criticised and commented that I have a ëvested interestí in saying all this. But having started to talk on Soundaryalahari publicly, I cannot but give you this warning. Let me conclude by saying that there is nothing wrong in approaching shAstras like Soundaryalahari as an aid to get Mother Goddessís Grace and  thereby to go upward in the spiritual ladder. It is enough you know that it is great. Just with that approach if you recite it, ambaal will give you  the necessary mental strength and maturity to reach higher levels of  spirituality. Automatically the ultimate object of realisation would also be obtained by Her Grace.