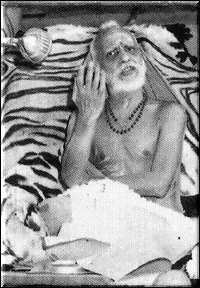 
The show of ‘mudrA’ is technically called ‘abhinaya’. To exhibit whatever mood there is internally, by the expression in the face, or by a symbolic gesture of the hands or feet is called ‘abhinaya’. Particularly, that shown by the fingers of the hands is called a ‘mudrA’. It is the science of  tantra that prescribes the ‘mudrAs’. The science and art of dancing has adapted only these ‘mudrAs’.

The bottomline of this  shloka is to say that all this business of hand mudrAs belongs only to the other deities. Ambaal does not show any of these mudrAs. Obviously one is thinking here of the Goddess Lalita-tripura-sundari only.