Bhakti and its place in jnAna mArga- Part 1 of 3 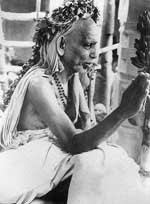 mumukShu is one who longs for mokSha. To help in the obtaining of that mokSha there are many procedures, many instruments of help. The processes of ‘shravaNa, manana and nididhyAsana’ (hearing, thinking and contemplation) are of such kind.

All the components of SAdhanA-chatushTayaM (the set of four disciplines of the SAdhanA) that we have been talking about all along are only such instruments of help. Collectively they are all called ‘sAmagrI’.

It is not ‘sAma-kriyA’ as is wrongly spoken of in the Tamil world; it has no connection with ‘kriyA’. When several things form necessary accessories to a certain object to be attained, they are together called ‘sAmagrI’. We use the same word in the sense of ‘instrument for help’ (upakaraNa).

Here the word used is *mokSha-kAraNa-sAmagryAM*. This therefore means ‘among the instruments of help for the obtaining of mokSha’. *gharIyasI* means ‘that which has weight’. Among the eight siddhis the process of becoming heavy like a rock is called ‘gharimA’.

‘gharIyasI’ means ‘heavy’ and ‘heavy’ implies importance and connotes ‘the best’. This is the meaning carried into the word ‘ghanavAn’ (a prominent figure). So here the Acharya says: ‘the best among such instruments of help that lead to mokSha’. And what does he indicate as ‘the best’?

This is where he brings in ‘Bhakti’!

It is the Acharya who delineated for us the SAdhanA-chatushTayaM, followed by shravaNa, manana and nididhyAsana. That completes the path – is the general understanding. But here he suddenly brings in something which is not there and says that is the most important instrument of help!