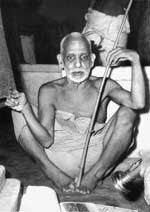 And this has to be done always. This is the ‘samAdhAna’ of the intellect. Now the Sadhaka has not yet matured to sit in dhyana and have his intellect dissolved in the Atman.

At this stage the intellect keeps on doing its functions. Use that intellect only in those functions which help you rise in spirituality. And what could be those functions except to know well the ShAstras about the Atman?

Except for the formal initiation (upadesha) into the mahAvakyas (which has to be done only at the time of taking Sannyasa), everything else has to be learnt now by proper study.

They have to be learnt at the feet of a guru. This is the VidyA-guru.

The one who later gives him the sannyAsa and initiation into the mahAvAkyas is the Ashrama-guru. It goes without saying that the latter has to be a SannyAsi himself.