Bhakti and its place in jnAna mArga- Part 3 of 3 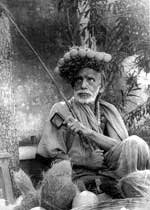 In the same way it is well known that, in advaita tradition, jnAna is the internal SAdhanA-component for mokSha, and for that jnAna to arise, the internal components are shravaNa, manana and nididhyAsana, and, though not to that extent internal, but still to be included as ‘internal’, the four of ‘SAdhanA-chatushTayaM’. Outside of these are the ‘external’ components, namely karma and bhakti.

When such is the case, the prime-most proponent Acharya of advaita declares the external component Bhakti as a very important accessory (*sAmagryAM gharIyasI*) and makes it get the status of an ‘internal’ component. How is that? Why so?

You might have expected a Swami of advaita mutt to talk only of advaita; but it appears I have been talking too long elaborately and in this process of my extensive talk, only some of you might remember what I told you long ago: namely, the matter about the two ‘grades’ – ‘lower’ and ‘higher’ – in both shraddhA and bhakti.

The Bhakti that was spoken of as a component for attaining one-pointedness of mind, is the ‘lower grade’ bhakti -- a subject at the high school level. In that context it is an ‘external’ component of advaita-SAdhanA. Now we have come to the level of a post-graduate Ph.D. level; at this point, the bhakti that is spoken of as *sAmagryAM gharIyasI* (the heaviest component) belongs to the ‘higher grade’. Mark it; there is ‘the highest’ also. That bhakti is what is done by a JnAni who has attained Enlightenment.

Why he does it, for what purpose and in what manner – these are questions for which answers are known only to him! Maybe even he does not know. Only the Almighty who makes him melt in that Love knows. That matter is outside of our expositions.

What comes within our exposition is the bhakti which is an ‘internal’ component-SAdhanA for mokSha and which is spoken of *sAmagryAM gharIyasI*.

In order to know why the Acharya brings it in this fashion, we have to first understand what Bhakti is.