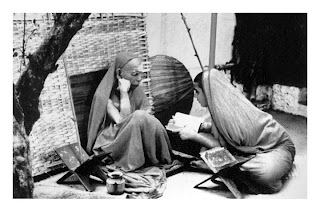 The principle behind the Space-ambalam (in Tamil) is also the God Nataraja of the Sabha-ambalam, namely the Assembly of Dance.

That is the case of the Cosmic Purushha. But in every one of us, in our hearts, there is a small subtle gate, which is point-size.

I said the disposition of JIva goes into that, shrinks and shrinks and finally merges there.

This is what happens when the JIva gets Godhood (of Shiva). It is delightfully called ‘Involution’.

It is the submerging action, by a convex caving in, of something which was expressing itself by expansion.

On the other hand, Shiva who is nothing but Sat (Existence), that is, the ParamAtmA, when he evolves into the JIva with body, senses and antaHkaraNaM, that happens again in this same heart by the sprouting of the ego in the expression ‘I am an individual JIva’.