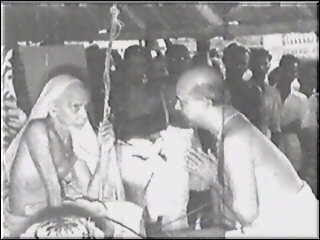 The antaH-karaNaM which lives on the strength of the individualistic JIva-bhAva created by itself, as well as the life-breath which gives life to the whole body – both merge into that single point, the single root of everything.

The enlightenment of the self as Self also takes place right at that point. It is a ‘point’, very small, like a needle eye. *nIvAra-shUkavat*, that is, as slender as the awn of a paddy grain; it has been said to be that small.

Within the heart, which is like the bud of a lotus suspended in an inverted position, there is a subtle space. From there spreads throughout the body a hot Fire, the Life-power; and in the centre of that Fire there abides a tongue of Fire, dazzling like the flash of lightning; that is the PrANa-agni.

That ends up at the point as the awn of a paddy grain. That point is the locale of the Atman (Atma-sthAnaM) – says the Narayana SuktaM.