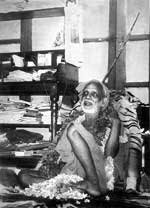 A well-known general opinion about Bhakti is that it is to think of the ParamAtmA as a ‘devatA murti’ (form of a divine) with name and attributes and to lovingly worship that form.

It is difficult to keep that love at the mental level only; so we have added to it certain actions like PujA (Ritual worship), darshan (of the deity) in the temples, and recitation of devotional hymns.

There is nothing wrong here.

But at the higher grade level of bhakti, one need not have to think of the Almighty as a Divinity with a form: one should get into the habit of showing love to the Almighty even when the latter is formless.

When the deity of devotion has a form with eyes, nose, ears and hands – four hands, eight hands -- with decorative dress materials visible to the eyes, when we get to know their attributes, glories, infinite compassion and grace through the various puranas and hymns, it is easy to direct and focus our love on such a divine form.