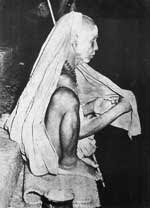 A continued prayer like this will one day flash the truth. It will nullify the intellect, manas and speech and produce a Self-realisation as the Atman itself. This is ‘Atma-varaNaM’.

The reciprocal process by the Atman, is beautifully described in the Upanishads and called *vi-varaNaM*. The word means ‘revelation of what is inside or hidden’.

In sum, the sAdhaka has to do only this. He should understand that intellectual smartness will not work with Brahman. What will work is only a constant prayer, after having discarded everything else, to Atman itself, to be the chosen goal.

The word ‘varaNaM’ which is the process here, includes in it the concept of ‘prayer’ also; that is how the Acharya has constructed his Bhashya for those mantras of the Kathopanishad.

The same Acharya here says: “Establish the buddhi (intellect) in shuddha Brahman”. What is meant by this? I think it is only this: The intellect should dwell, not on shuddha brahman, but in a one-pointed way on what has been said by the Guru and the Shastras about Brahman.